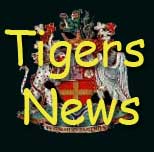 On a sunny morning Tewkesbury tigers under 12’s hosted Cinderford.
This was going to be a great contest as there were several players unavailable for selection . But fortunately Tewkesbury has strength in depth.

First half saw Cinderford have the better start to the game dominating the scrums and break down areas, this was expected as Cinderford are a big physical team that wont and dont take a step backwards so Tewkesbury would have to fight for every ball. To be honest Cinderford’s domination paid off has their forwards drove up the field to cross the line for their first try. This however seemed to wake Tewkesbury up and they replied with some good passing down the line to cross the line themselves 7-7 both tries converted. Cinderford however were in no mood to let Tewkesbury get into their flow and under pressure after a good kick by Cinderford, Tewkesbury conceded another try which also was converted 7-14 . Tewkesbury after some harsh words by their coach started to pressure Cinderford and this paid off with an unconverted try 12-14. Tewkesbury now had their tails up and managed again to cross the line for a converted try 19-14 . Cinderford dominated the scrums and break downs but tewkesbury always looked dangerous in open play. half ended 19-14 .

2nd half started the same both teams fighting for dominance but with Cinderfords big forwards were slowly tiring and Tewkesbury’s backs started to find more space to run into this enabled them to score first, conversion missed 24-14 . Cinderford then dragged Tewkesbury into a forwards battle and the game got messy but Tewkesbury battled on and went over for 2 more tries one converted and one not final score 36-14 . The score does not reflect how well Cinderford played but does highlight how well Tewkesbury can play when given space on the ball.

Players to mention –
Tyler – great in the break downs and won loads of ball.
Brendan – great lines of running always a threat.
Ben Peters always in support, rewarded with a try.
Charlie Kendrick great controlled lovely kick offs.
Henry and Sean in the center great partnership, aggressive and aware of the space lovely hands.
Miles – had a stormer at Scrum half.
Mason – line out throwing was outstanding
As for the rest not mentioned great performance all round, showed great passion, well done lads.
Share This